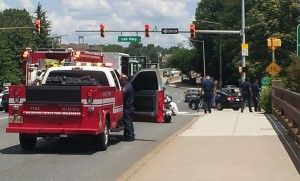 The traffic lights at the intersection of westbound Lee Highway and Lynn Street, in Rosslyn, are blinking due to an earlier fire.

A pedestrian walk signal at the intersection somehow caught on fire around 11:30 this morning. The fire was minor and eventually burned itself out, but not before passersby caught sight of smoke coming from the signal. As a result of the fire, power was temporarily cut to all traffic signals at the intersection.

As of 12:10 p.m., the lights were operating on battery power and blinking red. Police were on scene assisting with traffic control.