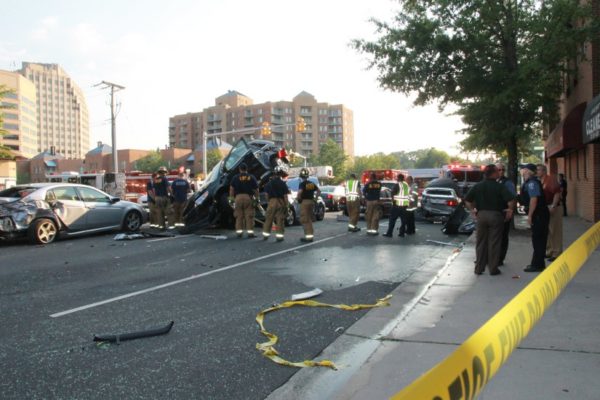 Update on 6/21/12 at 11:35 a.m. — Police report the driver of the SUV has been charged with reckless driving. They have also updated the number of vehicles involved to be 10. In addition to the woman who was trapped in her car, one other driver and one other passenger were also transported to Inova Fairfax hospital with non-life threatening injuries.

(Updated at 7:25 p.m.) A driver may be charged after a serious accident Wednesday evening on Washington Boulevard in Ballston.

Around 6:00 p.m. police received the call of an accident with injuries on Washington Boulevard between Glebe Road and Vernon Street. Nine vehicles were involved in the crash.

During their investigation, police say they discovered that the driver of an SUV was spotted driving recklessly. As he approached the red light, he allegedly made no effort to stop and rear-ended the driver of a convertible. The SUV ended up on top of the convertible, and the woman inside became trapped. The woman was extricated and transported to Inova Fairfax Hospital with non-life threatening injuries.

Police are still speaking with the driver of the SUV. It’s likely that he will be charged with reckless driving, we’re told.

As of 7:25 p.m., traffic was getting by slowly on Glebe Road, but Washington Blvd was still shut down through Stafford Street.