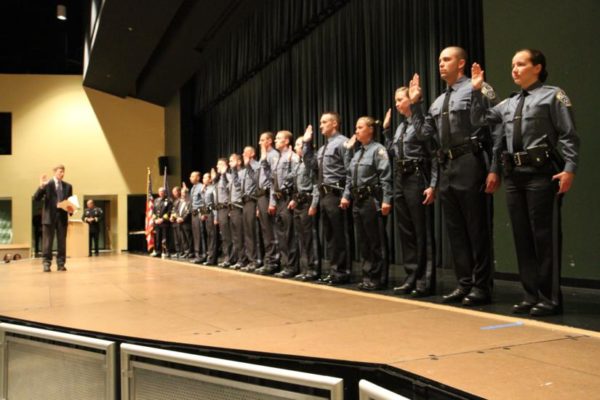 The recruits — eight male, five female — pledged an oath and were given their badges. The ceremony followed the recruits’ graduation from a regional police academy. They will now undergo nearly half a year of field training before becoming full officers.

The ceremony included a speech from Arlington County Police Chief M. Douglas Scott. The swearing in was conducted by Arlington Clerk of the Circuit Court Paul Ferguson. Loved ones of the new officers helped to pin the badges on their uniforms while other friends and family members in the audience applauded.

After the swearing in, the event continued with a ceremony for 12 police department members who have received promotions.

Also recognized was Officer Ronald Grannis, who received the Departmental Purple Star after being seriously injured in a crash with an impaired driver on July 20, 2011. Grannis “spent over a month in the hospital and has battled through over ten surgeries while continuing to fight to return to full duty,” according to police.