In response to a controversial mixed use development proposed for Wilson Boulevard, a number of Bluemont residents have banded together to form the “Safeway Task Force,” and will be holding a public meeting tomorrow.

The group is made up of members of the Bluemont Civic Association and aims to educate community members about the proposed development. Members say they want to ensure that the Bluemont community is able to help shape future changes at the Safeway site at 5101 Wilson Blvd.

Earlier this year, Safeway began soliciting bids from developers who may be interested in building a new grocery store, with residential property above it. The building would take up the entire block of Wilson Blvd from N. Frederick Street to N. Edison Street. 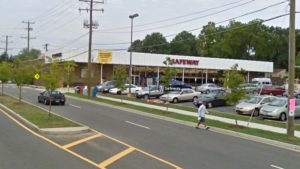 Last year, attendees at a Bluemont Civic Association meeting confronted County Board Chair Mary Hynes about the development. A number of residents voiced concerns about increased density along the stretch of Wilson Blvd in question, and also worried about how small businesses would fare.

The task force will be hosting a town hall meeting on Tuesday, July 10 (tomorrow), which is open to the public. It will be held at St. Ann’s Church (5300 N. 10th Street), starting at 7:00 p.m. Members of the county Planning Commission will be on hand to speak about issues related to the proposed development, such as zoning and by-right policies, and will answer residents’ questions.

In the coming months, the task force hopes to meet with Safeway representatives to discuss plans for the future. The task force’s charter states it plans to wrap up work by November 1, at which time it will be decided if it is needed any longer.