A controversial development plan will be debated at the Bluemont Civic Association meeting tonight.

The plan, which we reported on in April, envisions a “Bluemont Village Center,” featuring new mixed-use developments along a stretch of Wilson Boulevard (west of Ballston) currently flanked by single-story shops, restaurants and an older Safeway supermarket. The plan was generated by the Bluemont Civic Association, with the volunteer help of a Virginia Tech graduate student, as part of its Neighborhood Conservation plan process.

The plan is only intended to guide future development along Wilson Boulevard, but its renderings of imagined 4 to 5 story buildings has elicited a strong response from residents who object to the potential increase in density. 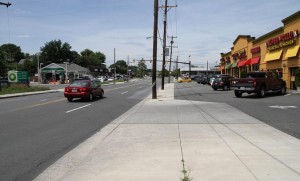 “Is this your ‘vision’ of Bluemont?” asks a flyer (after the jump) that has been widely distributed in the neighborhood. The flyer argues that the plan could result in the displacement of existing small businesses (like Two Chefs, Pupatella and Body Dynamics), the addition of 100 to 200 apartments, greater competition for on-street parking and “at least 200 more cars flooding neighborhood streets each morning and evening.”

The flyer also cites a Bluemont Civic Association survey, which found that 54.5 percent of respondents objected to building heights over 3 stories. The same survey, however, found that 69.7 percent of respondents favored a “‘village center’ type development” — defined as “a mix of retail, office, residential, and cultural uses in a compact, pedestrian-oriented center.”

On its web site, the civic association defends its actions and encourages residents to “get the facts” tonight.

There’s been quite a bit of misinformation swirling about Bluemont lately! Strongly-worded flyers delivered about the neighborhood are spreading fear and uncertainty about BCA’s activities. The truth is this: BCA is working for you! We represent the interests of the neighborhood and its residents. We always have, and we’ll continue to do so.

In an “FAQ” released this month, the civic association says that the plan “grew from community input… and was intended to provide a community-backed vision when — not if — development would occur.”

Tonight’s civic association meeting will take place at 7:30 p.m. at Arlington Traditional School (855 N. Edison Street). In addition to the debate over future development, the meeting will include the annual election of the association’s officers and representatives. 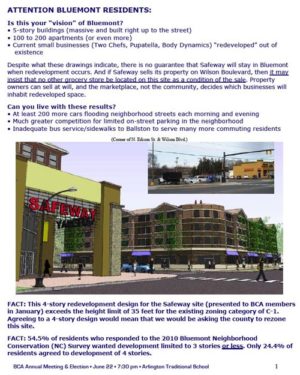 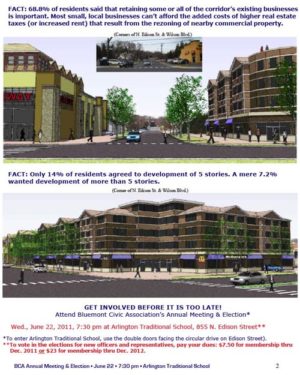