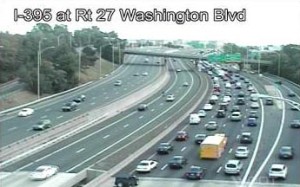 The morning commute got even worse for many in the area this morning, following an accident on I-395 on or near the 14th Street Bridge.

The accident was reported between 7:00 and 7:30, and was said to be blocking several lanes. The lane closures have since been cleared, but as a result of residual delays traffic is crawling all the way back to Alexandria on I-395.

Other main routes that feed onto I-395 also seem to be affected. Eastbound traffic on Route 50, Washington Boulevard and Columbia Pike is very heavy, and delays have also been reported on the GW Parkway near Reagan National Airport.

Alternate streets, such as Route 110 and Route 50, have become jammed as well. Although parts of the George Washington Parkway seem to be moving, other areas are moving slowly, such as the area near the airport.

Drivers should expect significant delays for the morning commute, and should check alternate routes.