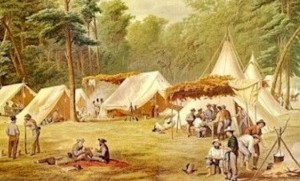 This Sunday (July 15) the Mount Olivet United Methodist Church at 1500 N. Glebe Road will be transformed into a Civil War encampment, in honor of the church’s role as a field hospital during the war.

Reenactors from 49th Virginia Infantry Regiment organization will be on hand for a Civil War living history event that will feature displays of medical tools and practices from the Civil War era, along with a wreath-laying, talks by actor portraying notable historic figures and opportunities to discuss “the boredom, hardship and daily activities of camp life” with the reenactors.

The event, sponsored by the Arlington Historical Society and the Arlington Civil War Sesquicentennial Committee, is free and open to the public. It will run from 10:00 a.m. to 3:00 p.m.

In an email, organizers described some of the history behind the event:

On July 15th, 2012, Mount Olivet UMC along with the Arlington Sesquicentennial Committee and Arlington Historical Society will host a Civil War Living History and medical display to honor the church’s use as a field hospital following the First Battle of Bull Run, or First Manassas. As Union troops fled back to Washington, DC in disarray after their rout on the battlefield, Mount Olivet was commandeered to treat the wounded.

Re-enactors from the 49th Virginia Regiment will set up an encampment on the Mount Olivet Green at the corner of Glebe Road and 16th Street. Visitors will meet and converse with soldiers about life in the camp, hardships they face, burdens, daily activities, drills, combat and boredom. Guitar and banjo music will help to carry the visitor back to an earlier day.

Inside the church, visitors can explore the state of Civil War medicine at a detailed display of medical tools and practices assembled from a member of the 49th Virginia’s extensive collection. Guests will gain an understanding of the primitive treatments and appalling conditions the sick and wounded experienced at the time.

The theme of the event is Mount Olivet: A Place of Comfort at a Time of Suffering. “The First Battle of Bull Run was a significant early battle in a conflict that would usher in the horrors and suffering of modern warfare,” says Dr. Bill Carpenter, Archivist and Chair of the Mount Olivet History Team. “The vast numbers of battlefield dead and wounded were unprecedented; the war would transform how Americans thought about death and suffering.”

In July of 1861, pews were broken apart and used as operating tables. Ultimately during the fall, the church was consumed by the surrounding Union encampments’ need for firewood and flooring in tents.

“Although Mount Olivet could no longer serve as a church for a time,” says Dr. Carpenter, “it is important for our community to remember its use to bring comfort and healing to wounded soldiers.”

Other special events during the morning will include:

Read more →
More Stories
Your Beermonger: The Spirit of CollaborationHee Been Asian Bistro Buffet Has Closed