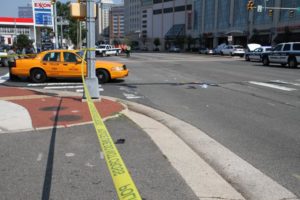 Investigators are on the scene of a critical pedestrian accident in Ballston.

The accident happened around 9:45 a.m. at the intersection of Glebe Road and N. Carlin Springs Road. An elderly female pedestrian was in the crosswalk, crossing Carlin Springs across from Ballston Common Mall, when she was struck by an Arlington Yellow Cab, according to Arlington County Police spokesman Dustin Sternbeck.

The woman’s injuries are thought to be life-threatening.

A neighbor told ARLnow.com that the pedestrian was a resident of The Carlin retirement home, one block away  from the scene.

A number of closures were in place while investigators took photos and interviewed witnesses. All southbound lanes of Glebe Road were blocked at Wilson Boulevard. Carlin Springs Road was shut down at N. Thomas Street. Both road reopened at 11:05 a.m.

Sternbeck said the driver of the cab remained on scene and cooperated with police. No word yet on any charges against the driver.

Warning: Readers might find one of the photos below disturbing.