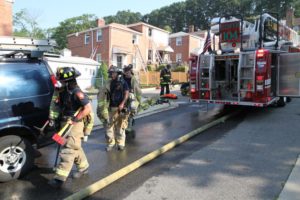 Firefighters battled a basement fire in a duplex near Four Mile Run Drive this morning.

The fire was reported at 8:25 a.m. near the intersection of S. Oakland Street and the Four Mile Run access road. Firefighters from Arlington, Alexandria and Fairfax County responded to the scene and were able to extinguish the fire within 20 minutes.

There was initially reported to be a person trapped in the burning house, but everybody ended up making it out safely. One occupant, described by a relative as a rising freshman at Wakefield High School, was taken to the hospital for treatment of smoke inhalation.

No word yet on the cause of the fire, but a fire department spokesman pointed out that there were no working smoke detectors found in the house.

“The fire department would like to take the opportunity to remind everyone to check their smoke detectors,” said Battalion Chief Matt Herbert.

Damage was confined to one occupancy of the duplex, Herbert said.

Despite the call being relatively early in the morning, firefighters still had to deal with hot and humid conditions. To help out, a neighbor set up lawn chairs in her driveway for the sweat-soaked firefighters to relax and hydrate in after the flames were out.