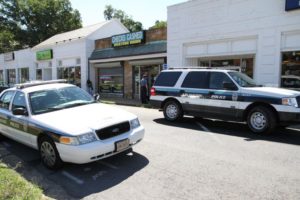 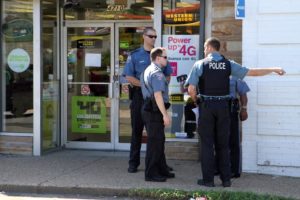 Police are investigating an armed robbery at a check cashing store on Columbia Pike.

According to police, an employee had been walking up to the door of the store in the 4700 block of Columbia Pike around 9:00 this morning to begin her shift. Two men approached her and forced her to unlock the door. According to Arlington County Police spokesman Dustin Sternbeck, one of the suspects held a knife to the woman’s neck, and the other held a gun to her head.

Once inside, the suspects reportedly forced the woman to take them to a back room and emptied the safe. They fled on foot with $40,000 in cash.

Police were unsuccessful in their attempts to track the men with K9 units. They are currently working to see if there is surveillance video of the incident.

The suspect descriptions are vague, but police are describing both as Hispanic men between 5’8″ and 5’10”. One was wearing a white shirt and the other was wearing a black shirt.

The store employee was not injured during the incident, and is continuing to assist police with their investigation.