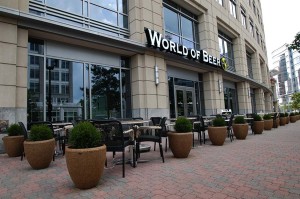 In one week, Ballston will be home to a new beer establishment. World of Beer (901 N. Glebe Road) is making its final preparations for opening next Monday (August 6).

Owner Evan Matz and his wife recently moved to Arlington from Florida. He enjoys the area and thought it would be the perfect place to launch Virginia’s first location for the Florida chain.

“I love Arlington. I think it’s a great area,” said Matz. “World of Beer looks forward to being Ballston’s neighborhood social scene, while being dedicated to the beer enthusiast.”

The coolers are stocked, thanks to a beer shipment that arrived last Friday. Later this week, kegs and tap handles will be delivered. In all, there will be more than 500 beers, with 50 rotating taps. New selections will come a couple of times every week.

Bartenders have to go through extensive training to become familiar with all the different types of beers. They should be able to give customers suggestions based on individual tastes, as well as giving the history of some of the more unique brews. Matz says the focus on the beer will make his place different from all the others in the area.

Traditionally, World of Beer establishments don’t serve food, but this location will in order to comply with state law. The limited menu will feature gourmet sausages, small bites such as soft pretzels, and beer-infused desserts. There’s been a unique partnership set up to allow customers to order from other restaurants and have the food delivered inside World of Beer. Matz said with the offerings both from his menu and those of Vapiano, BGR The Burger Joint and P.F. Chang’s, customers will have plenty of variety when it comes to dining options.

Inside, sports fans can catch the games on the TVs throughout the establishment, and there will be free live entertainment on Wednesday through Saturday evenings. Those who want to get some fresh air can take advantage the outdoor seating. Happy hour will take place on weeknights, along with different daily specials such as trivia night or service industry night.

Because it reached its goal of 1,000 Facebook fans and 500 Twitter followers, World of Beer is holding a special pre-grand opening party for all the fans and followers on August 6. Social media followers or not, Matz invites everyone with a passion for good beer to stop by.

“We’re giving Ballston and Arlington a place where people can come and enjoy better tasting, better quality beer,” said Matz. “We want to make sure that everybody enjoys the music, the entertainment, just the laid back atmosphere of World of Beer.”