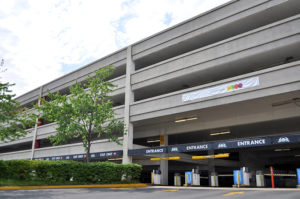 Police believe the incidents took place between 11:00 a.m. and 4:00 p.m. Two of the victim vehicles belonged to law enforcement agencies, according to Arlington County Police spokesman Dustin Sternbeck. Sternbeck wasn’t able to confirm which agencies were involved, except to say that the vehicles did not belong to Arlington County. ARLnow.com hears that at least one of the vehicles was an undercover Fairfax County police car.

Sternbeck said that mall-goers can help protect themselves from theft by making sure to lock their vehicles and by keeping valuables like iPods, GPS units and cash hidden in a locked glove box or trunk. Shoppers are also asked to report suspicious activity in such parking garages to police or mall security.