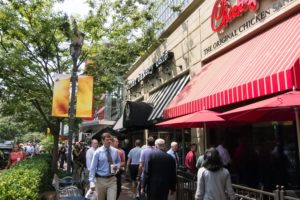 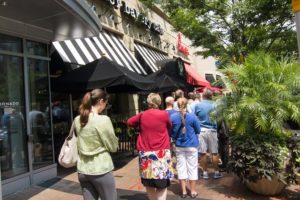 The event, organized on Facebook to demonstrate support for the restaurant after its CEO came under fire for remarks critical of same-sex marriage, drew large crowds across the country, including in Arlington.

Natalie Yang, owner of the Crystal City franchise at 2200 Crystal Drive, said her store had one of its busiest days in memory. She added her staff “treated it just like any other busy day.”

A reader sent in the photos above, which show a long lunchtime line stretching down the sidewalk on Crystal Drive.

The Ballston Common Mall Chick-fil-A also reportedly had a larger than normal lunchtime turnout. Franchise owner Andrea Hevia said Wednesday morning that her store hadn’t made any special plans to accommodate the rush, but one tipster said an ‘Appreciation’ crowd showed up anyway.

“This was one of the biggest expressions of support for free speech and free enterprise in recent Arlington memory,” the tipster wrote.

Yang said the line at her store reached Ted’s Montana Grill, about a half-block distance.

“We were too busy to even take pictures,” Yang said.

In July, the mayors of Boston, Chicago and San Francisco made clear their distaste with Cathy’s remarks, and discouraged the company from placing franchises in their cities. Huckabee praised the company, which doesn’t operate on Sundays, as a “true American success story.”

“Too often, those on the left make corporate statements to show support for same sex marriage, abortion, or profanity, but if Christians affirm traditional values, we’re considered homophobic, fundamentalists, hate-mongers, and intolerant,” Huckabee wrote on Facebook.

There were reportedly no counter-protests or demonstrations on Wednesday at the Crystal City Chick-fil-A location. Yang said her staff was too wrapped up with serving customers to notice anything past the long line.

“We treat every one here with honor, integrity and respect,” Yang said. “We appreciate their support. And we didn’t run out of food.”