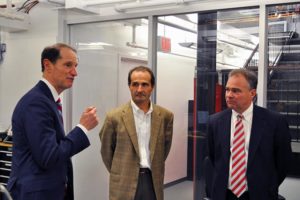 The company sells efficiency-monitoring software to electrical utilities, government agencies and private corporations. According to CEO John Spirtos, it employs about 100 people between its corporate headquarters (2801 Clarendon Boulevard) and its manufacturing facility in Roanoke.

In a statement, Kaine touted GridPoint as an industry leader in energy efficiency solutions.

“GridPoint’s innovative energy management systems are saving companies up to a fifth of their total energy costs per month,” Kaine said. “These are dollars that can be invested back into the business to expand and hire new workers. Their advancements in energy efficiency and conservation technology are absolutely essential to ensuring our businesses can compete in an increasingly competitive global economy.”

Kaine also touted his own record of helping to bring GridPoint to Arlington. In 2007, Kaine approved a $500,000-incentive package from the Governor’s Opportunity Fund to entice GridPoint to move its headquarters to Arlington from Washington, D.C.

“My economic development team played a big part in bringing GridPoint’s headquarters here. We considered it a big victory because of the kind of business that it has and the kind of talent that it has,” Kaine told a roomful of GridPoint employees on Thursday. “Where we really have thrived is we just try to bring the best talent here. If you win the talent race, you win the economic race.”

Kaine toured part of the company’s 30,000-square-foot space at the corner of Clarendon Boulevard and N. Edgewood Street with Sen. Ron Wyden (D-Ore.) and Spirtos to highlight his “Strengthening Our Economy Through Energy Innovation” plan. 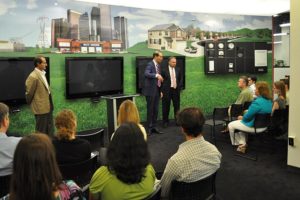 Professional and technical services accounted for a fifth of Arlington County’s jobs, according to the county’s annual profile. Spirtos said that local base of highly-trained workers is one reason why GridPoint fits among Clarendon’s high-end retail shops and restaurants.

It was revealed this week that Gridpoint has received another $23 million in venture capital funding, bringing its total funding to $263 million, according to GigaOm. In addition to its Virginia locations, Gridpoint has offices in Austin, Texas; Ottawa, Ontario; and Seattle, Washington. 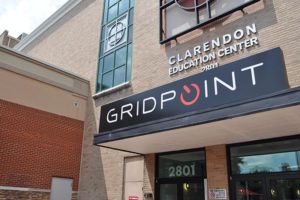 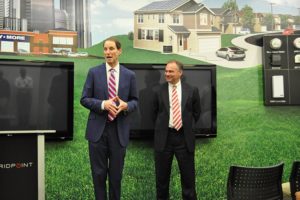