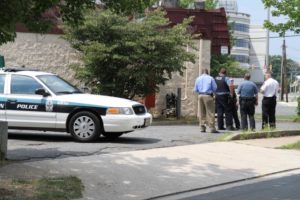 (Updated at 3:15 p.m.) Police are on the lookout for a suspect in a brutal daylight stabbing near Clarendon.

A man was stabbed multiple times outside the Pio Pio restaurant at 3300 Wilson Blvd just after 1:30 this afternoon. He was transported to Inova Fairfax Hospital in what’s now being described as life-threatening condition, according to Arlington County Police spokesman Dustin Sternbeck.

Police say the incident started when the victim, who was working in a nearby office building, spotted a man breaking into his car. The victim gave chase across Wilson Boulevard, and the two men got into a physical altercation outside Pio Pio. During the struggle the suspect took out a knife and stabbed the victim numerous times in the hands, shoulder, front, back and arms, according to Sternbeck.

Blood could be seen splattered on the walls and sidewalk outside of the restaurant.

After the stabbing the suspect took off south on N. Jackson Street, toward the Ashton Heights neighborhood. A police officer was flagged down by a witness at 1:38 p.m., Sternbeck said. Officers set up a perimeter and used a K-9 unit to try to track down the suspect, but police believe he may have stolen a white work van a few blocks away in order to flee the area. Officers are currently looking for the van, Sternbeck said.

The victim is being described as a 31-year-old resident of Montgomery County, Md. The suspect is described by police as a 28 to 32 year old Hispanic male, approximately 5’9″ and 150 lbs. He was wearing a white t-shirt that was likely ripped in the struggle, was well as dark blue jeans.

Warning: Readers might find one of the photos below disturbing.