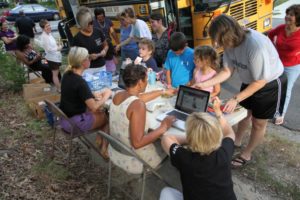 (Updated at 9:10 a.m.) Teachers and administrators at Abingdon Elementary School are declaring the first year of their summer “book bus” a success.

The book bus was launched this summer with the goal of providing enhanced reading opportunities for students at Abingdon, where nearly 53 percent of students qualify for a free or reduced-price lunch. Once a week for five weeks, the bus would make stops in the community around Arlington, giving students the chance to check out books right in their neighborhood.

The bus was staffed by Abingdon teachers and the school’s principal, all of whom volunteered their time. Inside the bus were about 2,000 books donated by local businesses, nonprofit organization, a local author, and several publishers. Much of the equipment used to check out books — including barcode scanners — were also donated.

“It was almost completely subsidized, which is fabulous,”  said Abingdon principal Joanne Uyeda.

Over the course of four weeks, about 200 students checked out more than 700 books, according to Abingdon literary coach Erin Watson. For the bus’ fifth week , students returned their checked-out books, picked out a free donated book to keep, and entered to win one of four Barnes & Noble Nooks. The Nooks will be given out during a school reading assembly during the first week of school.

“You can trace about 80 percent of the achievement gap to summer reading loss, because middle class kids gain a month over the summer and disenfranchised kids lose three months,” Uyeda said. “By the time they leave elementary school they’re roughly two years behind, and they don’t make that up in middle school.”

Julie Bato, a parent of an Abingdon student and a teacher at Long Branch Elementary, said the book bus brings the community together and allows students to see their teachers during the summer.

“It’s great,” she said. “I love seeing all the neighborhood kids come out. The appreciation the staff has for these kids, some of whom might not get to the library over the summer… I just think that’s priceless. They’re the reason the kids want to come. They want to see their teachers, they want to see their principal.”

One young student was so grateful to the book bus volunteers that he brought them pudding cups and spoons on the last week.

Teachers and administrators both said they hope to bring the book bus back next summer.

“We want to keep doing it every summer, if we can,” said Susanna Smith, a reading teacher at Abingdon. “It’s a lot of fun seeing the students smile when they see their teachers during the summer.”