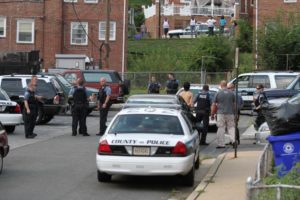 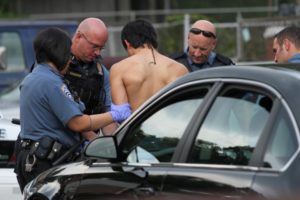 A man is in jail after allegedly beating up his roommate over money.

The incident happened yesterday (Tuesday) evening in the Nauck neighborhood. Police say a knife-wielding man beat up his roommate after accusing the victim of stealing several hundred dollars. Police responded and swarmed the area when a neighbor called police to report seeing the victim bleeding and hunched over outside the house, with the suspect standing by him with a knife in hand.

The victim — who wasn’t actually stabbed, according to police — was treated and released for minor injuries.

MALICIOUS WOUNDING, 08/21/12, 3600 block of S. Kemper Road. On August 21 at 4:35 pm, two roommates got into a dispute over money and a physical altercation ensued. One of the roommates pulled a knife and beat up the victim roommate, who had to be transported to a local hospital with minor injuries. Jose Alejandro Mendez Cruz, 19, of Arlington, VA, was arrested and charged with malicious wounding. He was held without bond.

On Sunday morning, meanwhile, a suspect cut a hole in the metal security gate of a Pentagon City store and stole $28 in loose change. Police say the suspect could have gotten away with much more — $700 in cash was sitting next to one of the registers.

The rest of this weeks’s Arlington County crime report, after the jump.

ROBBERY, 08/21/12, 2400 block of S. Glebe Road. At 9:45 pm on August 21, an unknown suspect threw hot coffee on the front desk attendant of a hotel, jumped the counter and stole a cash drawer with approximately $450 and a cell phone. The suspect fled the scene in a white sedan. A K9 track and US Park Police helicopter assisted in the search of the suspect, which yielded negative results. The suspect is described as a black male, 6’0″ tall and 170 lbs. He was wearing a black hat, reading glasses, black athletic jacket, white athletic shorts and white shoes at the time of the robbery.

ATTEMPTED ARMED ROBBERY, 08/19/12, 1100 block of S. George Mason Drive. At 3:25 am on August 19, two unknown subjects entered a convenient store in an attempt to rob the cashier. One subject brandished a firearm and demanded money. When the second subject entered the store, a firecracker exploded in his hand causing both subjects to flee the scene. Nothing was taken from the store. The suspect with the firearm was described as a white male, approximately 5’8″ tall with a medium build and black hair. He was wearing grey hoodie sweatshirt, a dark bandana around his face and black shorts. The second suspect was a black male, approximately 5’7″ tall with a average build and was wearing a white v-neck tshirt and dark shorts.

ATTEMPTED SEXUAL ASSAULT, 08/19/12, 2400 block of N. Custis Road. At 2:34 am on August 19, a female victim was walking home alone from the Courthouse Metro station when a male subject grabbed her from behind and forced her to the ground. The victim bit the subjects hand as he covered her mouth and then screamed for help, causing the subject flee the scene. The suspect is described as a white male, approximately 5’7″ tall, weighing 200 lbs. He was wearing a white button down shirt and blue jeans at the time of the incident.

BURGLARY, 08/20/12, 6100 block of N. Washington Boulevard. Between 8:43 am and 1:35 pm on August 20, an unknown subject(s) entered a locked residence through a rear door and stole jewelry and silverware. There is no suspect(s) description.

BURGLARY, 08/19/12, 2700 block of Wilson Boulevard. Between midnight and 9 am on August 19, an unknown subject(s) entered a business and stole cash, iPad and laptop. There is no suspect(s) description.

BURGLARY, 08/18/12, 1600 block of Clarendon Boulevard. Between 12:30 and 5 pm on August 18, an unknown subject(s) entered an apartment and stole a laptop, camcorder and camera. There is no suspect(s) description.

BURGLARY, 08/15/12, 5000 block of S. Chesterfield Road. Between 7 am and 3 pm on August 15, an unknown subject(s) pried open a dead-bolted door and stole cash from a residence. There is no suspect(s) description.

BURGLARY (COMMERCIAL), 08/17/12, 2400 block of N. Lee Highway. Between 12:45 and 1:15 am on August 17, two subjects broke into a gas station and stole cigarettes, cigars, lighters and condoms. Police witnessed the crime from a parking lot across the street. After a brief foot pursuit the subjects were taken into custody. Elmer Randall, 25, of Arlington, VA, and Camron David Rashed, 20, of no fixed address, were arrested and charged with burglary, petit larceny and possession of burglarious tools.