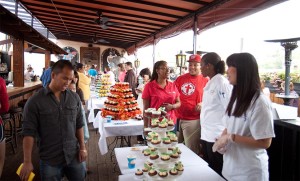 Are you a cupcake fanatic? When you go to sleep at night, do you count cupcakes instead of sheep? Do you watch television shows about cupcakes? To you, is a cupcake and coffee a perfectly acceptable breakfast?

If you said yes to any of those questions, you’re probably going to like an event that’s coming to Rosslyn next month.

The third annual “CupcakeCampDC” will be held from 4:00 to 6:00 p.m. on Saturday, Sept. 8, at the Continental Pool Lounge (1911 N. Fort Myer Drive). The event is described as “an ad-hoc gathering born from the desire for people to share and eat cupcakes in an open environment.” Bringing your own fresh-baked cupcakes to the event is optional but encouraged; eating a bunch of cupcakes is expected.

The event will benefit the DC Candlelighters Childhood Cancer Foundation. Tickets are available for a suggested donation of either $5 or $10, depending on whether you want “VIP” access. Organizers say last year’s event, held at Local 16 in D.C., sold out.

In addition to the consumption of cupcakes and networking with fellow cupcake fans, CupcakeCampDC will feature free gaming at the Continental’s skeeball, shuffleboard, darts, basketball, pool, Wii, and board game stations. There will also be a cupcake competition.

“Bakers will be split between professionals and amateurs giving everyone a chance with fair play,” organizers said. “Local judges include foodies we love — Nikki Rappaport of Cupcakes for Breakfast, The Cupcake Crusaders, and many more”

Tickets for CupcakeCampDC are available online.