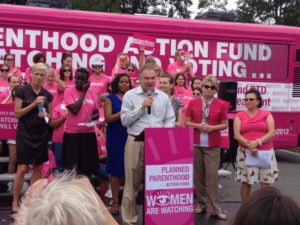 Former Virginia governor and current U.S. Senate candidate Tim Kaine (D) was among the notable political figures who took the podium at a rally for Planned Parenthood in Arlington over the weekend.

Planned Parenthood’s “Women are Watching” bus tour stopped at Virginia Highlands Park near Pentagon City on Sunday morning. With a bright pink bus as a backdrop, Kaine told the crowd that he was committed to pro-choice policies and against efforts to place restrictions on birth control.

Howell and Herring spoke of some of the bills pushed by Republicans during the latest legislative session in Richmond, including a bill that originally would have required women seeking an abortion to receive a transvaginal ultrasound. (The bill was amended to only require an external ultrasound after it made national headlines.) Also discussed was the more recent controversy over remarks by Rep. Todd Akin (R-Mo.). Akin falsely suggested that the female body “has ways to shut… down” and prevent a pregnancy during a “legitimate rape.”

Charniele told the crowd of more than 100 Planned Parenthood supporters that politicians should be required to have a basic understanding of biology before they try to legislate on it.

While politics dominated the rally, not everything discussed was of a political nature.

One of the speakers was a young female immigrant who was diagnosed with breast cancer during a Planned Parenthood screening. She spoke of how, though she lacked health insurance, the organization provided the support and financial assistance she needed to get a mastectomy and emerge from treatment cancer-free.

Kaine will face Republican George Allen on the Nov. 6 ballot in Virginia.

Photos courtesy Kaine for Virginia and Cliffords Photography, as labeled