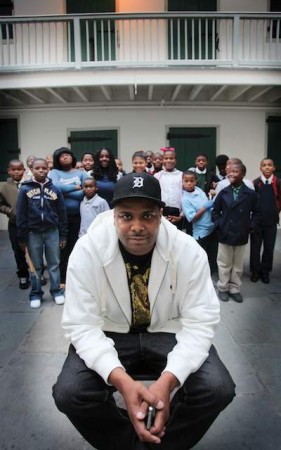 New Orleans is on the minds of many in the country, as Tropical Storm Isaac strengthens and barrels down on the city, which was devastated by Hurricane Katrina in 2005.

But if Katrina proved anything, it’s this: regardless of Isaac’s impact, New Orleans’ unique culture will remain as vibrant as ever. And part of that culture will be coming to Arlington next week.

Bayou Bakery in Courthouse (1515 N. Courthouse Road) will be hosting a “one night only” concert by a lineup of notable New Orleans jazz artists from 6:00 to 9:00 p.m. on Saturday, Sept. 8.

Among those set to perform are Derrick Tabb and Stafford Agee of the Grammy award-winning Rebirth Brass Band, Jeffrey Hills and William Smith of the Preservation Hall Jazz Band, eight members of the Roots of Music Crusaders marching band, along with drummer Terrance Andrews and saxophonist Allen Dejan.

Tickets for the event, described by Bayou Bakery as “a once in a lifetime jam session of continuous live music,” start at a minimum donation of $60. Proceeds from the event will benefit The Roots of Music, a New Orleans-based program that helps develop the musical talents of 9-14 year olds. Tabb, a drummer, was named a “CNN Hero” in 2009 for his work with The Roots of Music.

Tickets are not yet available for purchase, but will include food (a choice of three Cajun entrees and dessert) plus drinks (three Abita draft beers for a $75 minimum donation, non-alcoholic beverages for $60). Seating will be limited, but the restaurant will provide standing space for those without seats.

In a press release, Bayou Bakery said it was chosen to host the concert due to owner David Guas’ Louisiana heritage.

“Being a native of New Orleans, Guas was hand-picked to host this intimate gathering and serve up some of his award-winning southern fare,” the restaurant said.