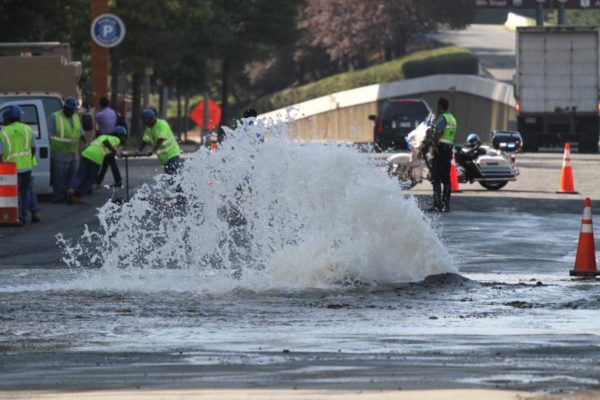 (Updated at 2:45 p.m.) A major water main break has shut down a number of roads in Crystal City.

For at least an hour, water was spraying about 5 feet in the air out from buckled pavement at the intersection of 12th Street and S. Clark Street. Arlington County crews managed to shut off several valves, which reduced but did not stop the water flow for several hours. As of now, the water flow has been stopped, but not before it created a large pond in and around the intersection.

The water came from a rupture in a 12-inch water main, according to Arlington County Department of Environmental Services spokeswoman Shannon Whalen McDaniel. As a result of work to stop the water flow, several large nearby buildings — 200 and 201 12th Street S.; 1215, 1225 and 1235 S. Clark Street; and the North Tract Loft apartments — had their water supply cut.

“They’re working right now to isolate the break so that they can restore water to the buildings and any affected businesses,” said Arlington County Police spokesman Dustin Sternbeck earlier.  Water has since been restored to all but one of the buildings.

During the height of the water main break, workers were encouraged to move their cars from nearby underground parking garages, as a precaution due to flooding, Sternbeck said.

The water also flowed down Long Bridge Drive toward 10th Street S. and “gushed” into the Boeing construction site for several hours, officials say. Crews deployed measures to stop the water from flowing into the site and are now pumping water out from the construction pit.

In a statement, authorities said the construction site will need to be stabilized before work can continue on the large, economically significant project.

Arlington County’s Chief Building Official, Shahriar Amiri, today ordered the Boeing Co.’s Crystal City construction site, located near 10th St. S and S. Ball Street, closed in the wake of this morning’s water main break. The break in a 12-inch water main sent water gushing into the site this morning. Construction is halted while the water is pumped out and structural engineers assess the damage and take whatever measures necessary to stabilize the shoring and sheeting, Amiri said. No evaculation orders have been issued at this time for surrounding buildings. County inspectors will continue to monitor the site and work with the structural engineers.

Work to dig up the street and repair the water main could take up to one or two days. The intersection is expected to remain at least partially closed until the work is complete.