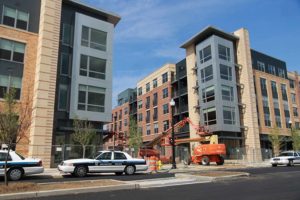 Construction has stopped on the new apartment building at 2201 N. Pershing Drive in Lyon Park, following the electrocution death of a worker.

According to police, two individuals were doing work on an electrical panel inside a closet. One of the workers walked away to get more supplies, and then heard a strange noise. Upon returning, he found the victim being electrocuted. The co-worker ran to get a board or some other object to knock the victim away from the electrical panel, but by the time he returned, the worker was unconscious.

Emergency crews administered CPR at the scene, and the victim was transported to Virginia Hospital Center with critical injuries. The man, believed to be in his 20s, died shortly after. According to police spokesman Dustin Sternbeck, the department is working to find and notify the victim’s family members, who do not live in the area.

Work has been suspended at the site and police remain on scene while OSHA performs an investigation.

Although the apartment complex started leasing earlier this year, construction has been plagued with delays. The first wave of renters was expected to move in starting in July, but so far the building is not ready for inhabitants.