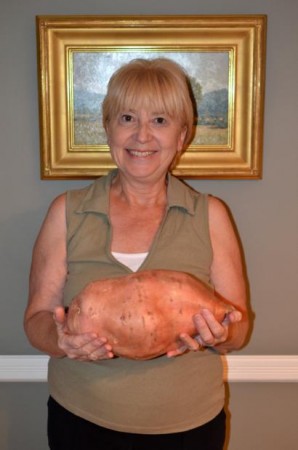 David and Susan Wase of Alcova Heights tried their hand at growing sweet potatoes this year, and they succeeded well beyond their expectations.

The couple managed to grow what they said was a seven pound sweet potato. Asked his secret for growing the giant root vegetable, David explained that sunlight, not shade, was key to his urban agriculture endeavors. That and some good ol’ fashioned mulch.

“A client of mine and fellow gardener had given me a few sweet potato shoots to plant in spring… never grew them before,” he said via email. “They were grown in a raised bed, nothing special other than some Arlington municipal mulch.”

“Every spring, Arlington County makes a big ‘to-do’ about planting more trees as part of their formally adopted ‘Tree Canopy Policy,'” he added. “Tree canopy and the ability to grow vegetables are pretty much mutually-exclusive. I’m fortunate because my yard is not heavily shaded, thus I was able to grow the sweet potato among other veggies, but I know so many other folks can’t have a garden because of extensive shade.”

The Wases still have a long way to go if they ever want to set a world record. A recent edition of the Guinness Book of World Records lists the largest sweet potato on record as 81 pounds.