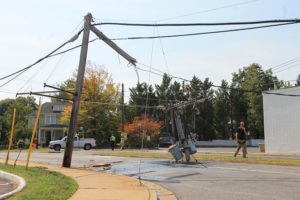 (Updated at 2:40 p.m.) — Power has been restored to nearly all of the 2,200 customers who were without power due to a vehicle accident in Cherrydale. The intersection of N. Quincy Street and Lee Highway, however, remains a mess.

According to an officer on the scene, just before 10:00 a.m., the driver of a large truck was attempting to make a right turn onto Lee Highway from northbound Quincy Street. Somehow he snagged a cable anchored into the sidewalk, which supports a utility pole. The top of the pole snapped and brought down wires, a transformer and part of another pole.

“This is all just because some guy couldn’t make a turn correctly,” the officer said.

The officer declined to comment on whether the driver received a ticket.

Traffic signals were dark in parts of Cherrydale, Ballston and Virginia Square in addition to the residential customers without power. Dominion was able to re-route power and all but 166 customers had electricity restored within an hour, according to Dominion spokeswoman Le-Ha Anderson. As of 2:40 p.m., there are only 9 remaining customers who don’t have power, and they are in the immediate vicinity of the accident.

Dominion crews are on the scene and have to replace the smashed transformer, one utility pole, the cross beam of another utility pole and will have to reconnect all the power lines. They also have to clean up the fluid that leaked from the smashed transformer, which Anderson said is harmless mineral oil. Crews had first hoped to have all the work finished sometime around 5:00 p.m., but due to the extent of the damage, the new estimate is in the 7:00-9:00 p.m. range.

Quincy Street remains closed between 20th Street and Lee Highway. Police are at the intersection to help with traffic control.