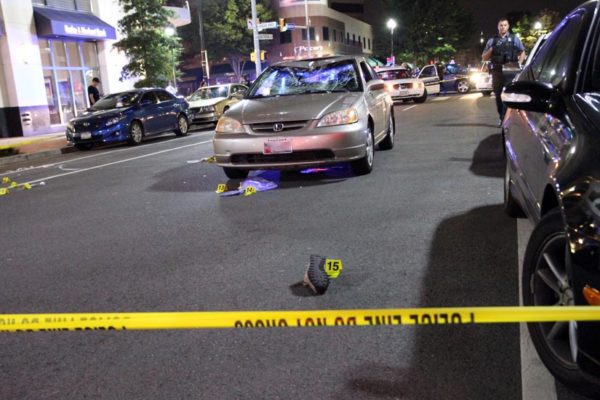 (Updated at 11:35 a.m.) Arlington County Police are investigating a serious pedestrian accident on a busy street in the center of Clarendon.

An adult male was struck by a Honda Civic coupe heading eastbound on Clarendon Blvd, near the intersection with N. Highland Street, around 12:30 a.m., according to initial reports. The man suffered life-threatening injuries and was transported via ambulance to George Washington University Hospital.

Police shut down Clarendon Blvd from Washington Blvd to N. Garfield Street while detectives investigated the accident. Crowds of Clarendon bar-goers peered from behind yellow police tape at the bloody evidence marked at the scene, including the victim’s shoes, pants and shirt.

The driver of the Honda, identified by police as 22-year-old Tyler Bruce Wills of Bowie, Md., was arrested on scene and charged with DUI and DUI Maiming. He’s currently being held without bond. Charges against Wills may change depending on the status of the victim, said Arlington County Police spokesman Dustin Sternbeck.

The victim, a 27-year-old man from Collinsville, Va., has been undergoing surgeries and remains in critical condition, according to Sternbeck. The victim suffered a fractured skull, two broken legs, a broken arm, numerous lacerations to his body, and a big laceration to his face. A friend was with the victim at the time of the accident and was able to notify his family, Sternbeck said.

Unconfirmed witness accounts suggested the victim was crossing just outside the crosswalk and was struck by the car, which was traveling through the intersection at what was described as a relatively high rate of speed. The victim flew through the air and came to rest, motionless, on the pavement, a witness said.

As of 2:15 a.m., a police accident reconstruction team was taking photos and using measurement devices to piece together a more definitive account of how the accident happened.