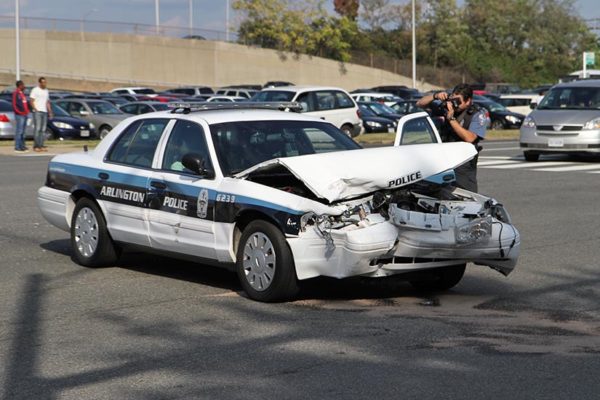 An Arlington County Police cruiser slammed into a vehicle in Pentagon City while responding to a call this (Sunday) afternoon.

The incident happened around 3:30 p.m. The officer was heading westbound on Army Navy Drive, responding to a large fight in progress at the Sheraton National hotel (900 S. Orme Street), when a Saab pulled out in front of him from a Pentagon parking lot. Multiple witnesses told ARLnow.com that the cruiser had its lights and siren on, while the driver of the Saab had a green light. One witness said he was in his car with the windows up and could not hear the siren.

The cruiser and the Saab collided, sending the Saab careening into the eastbound lanes of Army Navy Drive. The cruiser wound up in the center of the intersection, facing an entrance to the Pentagon City mall parking garage.

Paramedics treated the female driver of the Saab at the scene for an apparent ankle injury. The officer did not require medical attention.

Eastbound Army Navy Drive was closed for at least an hour while police photographed the scene and took witness statements. No word yet whether any charges will be filed as a result of the accident.