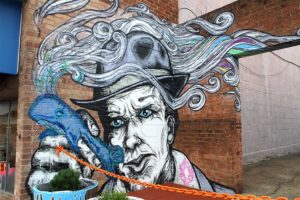 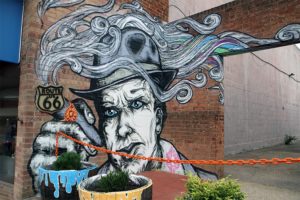 There’s a whale of a difference between the old and new murals at Smokey Shope III (554 23rd Street South) in Crystal City.

The store — which sells various types of gifts and smoking paraphernalia — had run into trouble with the county over a mural on the side of the building depicting a man smoking a cigar. The painting was viewed as an advertisement for products inside, thus constituting an illegal sign.

To remedy the situation, owner Atta Amin arranged for the cigar portion of the mural to be painted over, replacing it with a whale. He said the colorful, billowing cigar smoke just happens to look similar to the waves of the ocean.

The change satisfied the county’s zoning office, and it also smoothed over things with Amin’s landlord, who at first objected to the mural. According to Amin, the building owner has allowed him to keep the mural up through the end of his lease. He’s currently four months into the five year lease.

Since the whale first appeared last month, Amin said he’s received no complaints about the mural from neighbors or customers.

“Hopefully people will be happy with it,” he said.

Amin said he spent a considerable amount of money to fix up the inside of the once-vacant building, located along the 23rd Street strip of restaurants and small shops. With the mural troubles out of the way, he’s now focused on attracting more customers.

“So far business is okay. Hopefully we can get the upper hand and see the hard work paid off,” Amin said. “Time is on our side.”