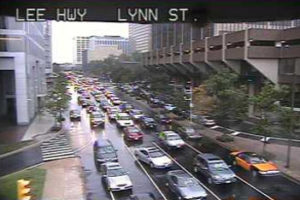 The Arlington County Police Department is embarking on a public education campaign to get drivers to stop blocking intersections and crosswalks on Lynn Street in Rosslyn.

Starting this week, the police department has assigned extra traffic patrols to the area during the morning rush hour, when gridlock gets especially bad on Lynn Street. (Although traffic is often heavy during the evening rush hour, as well.)

The officers will remind drivers that it’s illegal to block the box — to enter into an intersection during a green light when there is no room to clear the intersection. For now, the officers will not be issuing citations, according to ACPD spokesman Dustin Sternbeck, who called morning congestion on Lynn Street a “disaster.”

“You should expect to see additional police presence in that area,” Sternbeck said. “We’re hoping in the immediate future that this education campaign will get people to change their behavior. Hopefully we can make an impact there, because it’s been a concern for a long time.” 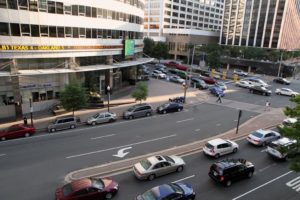 In support of the campaign, the Transportation Engineering and Operations Bureau of Arlington’s Department of Environmental Services will be installing “Do Not Block Intersection” signs at all of the intersections along N. Lynn Street between Wilson Boulevard and the Key Bridge. Existing Do Not Block Intersection signs at N. Lynn Street and Wilson Boulevard, meanwhile, will be replaced with larger versions of the sign.

“The signs are currently being fabricated and should be installed within the next three (3) weeks,” said DES spokeswoman Myllisa Kennedy. In addition to the signs, this coming spring DES will be installing pavement markings at the Wilson Boulevard and Lynn Street intersection which are intended to “help define the ‘box.'”

Lynn Street serves commuters heading to the GW Parkway, I-66 and D.C. via the Key Bridge.