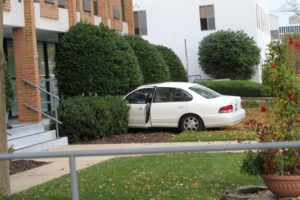 An elderly driver was involved in a bizarre accident near Crystal City this afternoon.

The elderly male driver seemed shaken up by his car’s airbag but not seriously injured, witnesses said. He was transported via ambulance to a local hospital. No other injuries were reported.

The office building, which houses NATO offices among other tenants, did not suffer any significant, apparent damage. Linden Resources’ flower bed was torn up and its front walkway railing was knocked over.