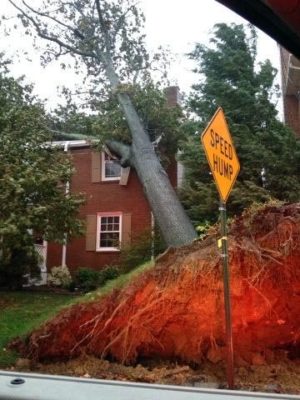 (Updated at 6:10 p.m.) More than 5,800 Dominion customers are without power in Arlington as of 6:05 p.m. as the strongest winds from Hurricane Sandy have started to arrive in the area.

Twitter users have been reporting power outages in the Buckingham area, in Westover Village, Lyon Park and in Crystal City, among other areas. Another large outage is being reported by Dominion in the far northeastern corner of Arlington County. Power has also been flickering in the Ballston, Clarendon, Courthouse and Pentagon City areas.

Wind gusts have been picking up over the past hour. Numerous reports of trees and wires down around the county have been pouring in to Arlington’s Emergency Communications Center. Currently, firefighters are on the scene of a tree that fell into a house, causing significant damage, on the 4800 block of 26th Street N. in the Yorktown area (pictured, left). No injuries were reported.

Additional calls for trees falling onto houses and are being dispatched. A large tree fell into the intersection of 5th Street S. and S. Harrison Street, according to firefighters on the scene.

Arlington County announced today that all county offices, libraries, courts, schools, community centers and nature centers will be closed on Tuesday. ART bus service has also been suspended on Tuesday.