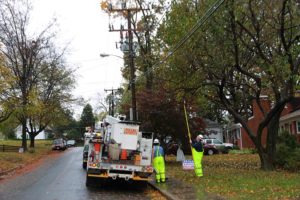 Update at 5:55 p.m. — All Arlington Public Schools (except Barcroft Elementary) will open on time tomorrow (Wednesday). “Parents are asked to be patient as buses may need to work around road closures in some parts of the county, causing delays on some routes,” said school spokesman Frank Bellavia.

Roads are gradually being cleared, dark homes are lighting up and residents are attempting to return to a sense of normalcy following Superstorm Sandy.

Currently, Dominion’s outage map shows 14,645 Arlington customers without power. The company promises to have crews working around the clock until power is restored. It’s hoping to complete its restoration efforts by Thursday night.

The federal government will be open for business tomorrow, according to the Office of Personnel Management, which will mean increased traffic on neighborhood streets that are still littered with storm debris.

Metro has resumed bus and train service and is slowly getting all lines back up to normal operation. Trains are running on a Sunday schedule. ART buses also resumed service this afternoon on routes 41 and 51. There may be delays if there is debris in the roads along the routes.

The Metropolitan Washington Airports Authority reports that Reagan National Airport fared well and didn’t experience any damage or flooding. Most flights are still cancelled today but there are a few taking off and arriving. Travelers are urged to check with their airlines directly for information about flights before going to the airport. MWAA will provide updates via Twitter as more flights begin to take off.

Early voters can go to Courthouse Plaza until 7:00 p.m. for in-person absentee voting. For now, the Barcroft and Madison locations remain closed, but the county hopes they can open tomorrow in addition to the Courthouse location. More information about absentee voting can be found online.

The county notes that an additional 2,000 people signed up for the Arlington Alert system during the storm, bringing the number of total subscribers to more than 50,000. The system provides emergency information updates via email or text message. Anyone interested in receiving alerts during the storm cleanup and for future public safety events can sign up online.