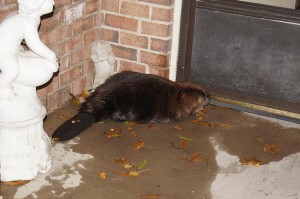 Humans aren’t the only ones suffering the effects of Superstorm Sandy. The storm apparently forced some beavers out of their habitats and into the streets of Pentagon City.

A few residents who live in a condo complex on S. Hayes Street were about to head out this morning when they were surprised by a wet, furry visitor.

The residents called animal control upon encountering the beaver scurrying from door to door. Desiree Lomer-Clarke said the animal control worker who came to the scene reported having to deal with two other beavers earlier this morning.

“Apparently their dam broke and they scattered from fear of drowning,” said Lomer-Clarke. “The other beavers were pushed towards bodies of water, but this one had to be trapped and released near its home.”

Arlington County naturalist Greg Zell said the animal sightings might indeed be weather related. The beavers may have chosen to leave if the pocket of air that’s typically present in their dens was compromised.

“It’s possible that high water could have driven them temporarily out of their homes,” Zell said. “It’s the first time I would have seen it in this area, but it’s certainly possible.”

Zell further explained that beavers ending up in a residential area is fairly unusual because they don’t seek out human interaction.

“Beavers are generally going to move away from people,” said Zell. “They eat sticks and twigs so they’re not attracted to people’s food and trash. This sounds like they were just homeless and cruising around.”

Because they avoid humans, there have been rare occasions when beavers have attacked a person or pet that came too close their dens and was deemed a threat. Zell recommends that anyone who encounters a beaver tries to avoid it, as with all wild animals. He said making loud noises, such as clapping, is often enough to send a beaver on its way.

The displaced beavers were not acting in an erratic manner to suggest they would have rabies — as happened twice this summer during beaver attacks in Fairfax County — so they were released near their homes.

As the area’s water levels return to normal, Zell said the beavers that wandered Pentagon City should be able to once again inhabit their dens. If the dens were damaged or destroyed by the storm, the animals should adjust easily to a new habitat.

“Beavers are very adaptable, they tolerate cold very well. They have a thick layer of fur and fat,” Zell said. “They’ll just find another place to go.”