Halloween in Arlington was relatively quiet, but it was not without a few notable crimes.

The first incident started out as a mystery right out of a horror movie: several pools of blood were found this morning within a one block radius of Ray’s Hell Burger in the Rosslyn area.

One was found on the sidewalk along Wilson Boulevard, between N. Rhodes Street and N. Quinn Street.

Then, two more were reportedly found in the parking lot and elevator of an apartment building on the 1800 block of N. Quinn Street. Also at the scene: a bloody CVS bag with shampoo and cat food in it, according to a witness.

At first, police were baffled by the blood — no one had called the night before to report any nefarious acts in the area. One nearby resident even told police he had been up all night with the window open and hadn’t heard a thing. Eventually, though, investigators located the source of the gore: a man who lived in the apartment building in which the blood was found.

The man — who’s in his late 20s, according to Arlington County Police spokesman Dustin Sternbeck — had a broken nose and a pair of black eyes. He didn’t remember much from the night before, but confirmed that he had been out drinking at nearby Red Hot and Blue, then left the restaurant and took a Lunesta sleeping pill. It was at that point that his memory got fuzzy. Police believe he got into some sort of altercation, but robbery was likely not the motive — he still had all his money and credit cards with him.

Police photographed and collected samples at the blood pools and then called the fire department to hose them down. Because the man couldn’t remember what happened, police don’t have much to go on in terms of finding a suspect.

“The investigation is ongoing,” Sternbeck said.

In Ballston, meanwhile, Halloween revelry took a dark turn when an intoxicated man hopped behind the bar of a restaurant on the 600 block of N. Glebe Road (in Ballston Common Mall) around 11:30 last night.

A female bartender confronted the man, at which time he grabbed a bottle of Amaretto and swung it at her, according to police. The bartender sustained a cut to her leg and was taken to Virginia Hospital Center. The man, identified as 30-year-old Jorge Zunagua of Alexandria, was detained by security, arrested and charged with malicious wounding. 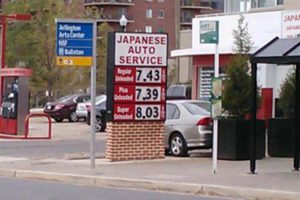 In Virginia Square, pranksters rearranged the numbers on a gas station sign to suggest that regular unleaded gasoline was $7.43 per gallon. A passerby informed the manager of the station (Japanese Auto Service) of the prank.