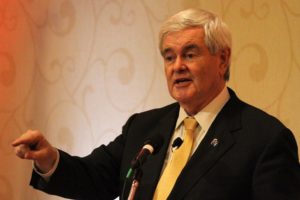 Former Speaker of the House Newt Gingrich (R) will be giving away cheap gas on Columbia Pike tomorrow (Friday) morning.

Gingrich, a McLean resident, will be appearing at the Pentagon Liberty gas station at 2300 Columbia Pike (next to Bob & Edith’s Diner) from 7:00 to 9:00 a.m., when the station will be offering gasoline for $1.84 per gallon. The event is sponsored by the New American Energy Opportunity Foundation, a group that promotes increased energy production in the United States.

The group has been critical of the Obama administration and, in September, connected the “anti-American uprising in the Middle East” to “our nation’s destructive energy policies.”

The $1.84 per gallon price reflects the price of gas in 2008, before President Obama took office and in the midst of the country’s economic crisis.

Newt Gingrich will appear at a New American Energy Opportunity Foundation “Gas Can Man” event taking place at the Pentagon Liberty Store at 2300 Columbia Pike tomorrow [Nov 2] from 7:00 AM to 9:00 AM. Drivers will be provided with $1.84 a gallon gasoline “to dramatically show voters what life was like before President Obama imposed onerous restrictions on domestic oil and gas exploration that resulted in soaring gas prices,” according to NAEOF spokesman Joe DeSantis.

The “Gas Can Man” promotion has been a “hugely successful effort throughout the state of Ohio this week, attracting immense crowds and media coverage. We expect the turnout in Arlington tomorrow will create quite a stir,” he said. It is part of a massive campaign to educate Americans on how energy independence can be achieved and includes a million dollar national radio ad buy, hundreds of thousands of dollars in newspaper advertising, a major Internet presence, including a video that can be viewed at www.EnergyIsOpportunity.com.

DeSantis explained that the events have been successful in increasing awareness of the fact “that we need to begin tapping America’s enormous energy resources now. We have the resources at hand to produce all the energy we need. Vast amounts of oil and gas are right under our feet. Energy independence is a practical and viable goal.”