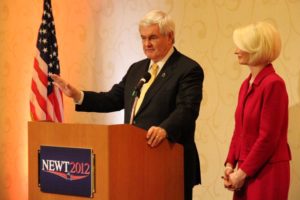 About 200-300 supporters of Republican presidential contender Newt Gingrich packed a large conference room in the Key Bridge Marriott in Rosslyn last night, to hear a brief campaign speech by the former House speaker.

“I have one opponent: Barack Obama,” Gingrich told the enthusiastic crowd.

But with a dozen television cameras rolling and with members of the national press corps typing notes into their laptops, Gingrich focused his sharpest words on GOP rival Mitt Romney. Specifically, Gingrich bristled at the negative ads Romney and others have been running against him in Iowa.

“If they don’t have anything positive to get elected on, they shouldn’t be running,” Gingrich said, later suggesting that Romney is in danger of being branded “just another normal national politician with clever consultants and a lot of money but no willingness to tell the truth.”

(Video of the speech is available via the Democratic blog Blue Virginia.)

Before and after the speech, campaign volunteers collected signatures to get Gingrich, a McLean resident since 2000, on the ballot in Virginia. Gingrich’s campaign needs to turn in 10,000 valid voter signatures today to get on the ballot for the Commonwealth’s primary, which is held on Super Tuesday (March 6).

Despite a busy campaign schedule, Gingrich and his wife took time to pose for photos with dozens of supporters after the speech. Gingrich’s campaign headquarters is located in Ballston.