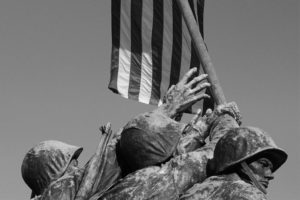 (Updated at 11:45 a.m.) This coming Sunday, Nov 11 is Veterans Day, and most county facilities will be closed on Monday as a result.

All Arlington County courts, libraries, public schools, and administrative offices will be closed on Monday, Nov. 12.

The county’s three indoor swimming pools will be open under holiday hours. Metro and ART will be operating under a holiday schedule. Trash and leaf collection will proceed as normal.

Local veterans organizations will also be holding a Veterans Day ceremony on Sunday. From 1:00 to 1:30 p.m., there will be a remembrance ceremony at the Clarendon War Memorial at the intersection of Wilson, Clarendon and Washington Boulevards.

“Each year veterans from Arlington County’s Veterans of Foreign Wars and the American Legion gather at the Clarendon War Memorial to remember local service members lost in past conflicts,” organizers said. The event will also remember an Arlington service member killed in action this year.

“There will be a special wreath presented in honor of Lance Corporal Niall Coti-Sears,” organizers said. “Lance Corporal Coti-Sears was killed in action in June of this year and is the first Arlingtonian to be lost in the Afghanistan war. Members of the public are encouraged to attend.”