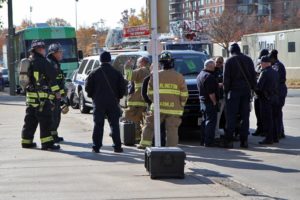 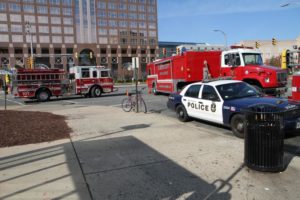 Update at 11:15 a.m. — The all-clear has been given and emergency responders are leaving the scene.

Earlier: Arlington County firefighters and Metro Transit Police are on the scene of a hazardous materials investigation at the Pentagon City Metro station.

Initial reports suggest a series of nearly a dozen soda bottles filled with a yellow-ish liquid were found on the platform. Authorities are trying to determine whether the liquid is hazardous.

The station is still open during the investigation, with only a portion of the platform closed to foot traffic.

“The station is open,” WMATA spokesman Dan Stessel tells ARLnow.com. “They’ve just cordoned off a portion of the platform. Trains continue to service the station normally.”

Metro Transit Police officers with bomb sniffing dogs could also be seen searching the area around the station entrance,