Restaurant Talk is a new, occasional feature written by Nick Freshman, a native Arlingtonian and co-owner of Spider Kelly’s and Eventide Restaurant in Clarendon.

Hello ARLnow readers! I have been a fan of this site since its earliest days, and I am now proud to be a contributor. I am amazed at the dining public’s bottomless appetite for content about restaurants and food culture. As an operator, I think this is great, and the attention certainly contributes to every operator’s success. However, there does seem to be an occasional disconnect between the dining public and restaurant professionals. I hope to offer a bridge between the two by providing an insider’s perspective on trends and issues that pertain to our business. And since I am a local, and this is the most local of websites, it will have an Arlington twist.

To kick things off, I’ll take advantage of the New Year theme and start a discussion about one food trend that should be of great interest to many who live and work in Arlington. In the coming weeks, we’ll discuss other trends and give you a chance to get your burning restaurant questions answered in a live Q&A. 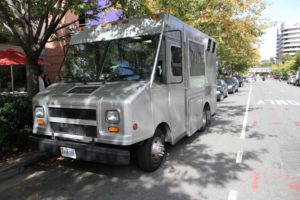 Ahhh, the food truck: bringing funky food to the cubicle masses in guerilla form. What an idea, albeit an old one in Arlington. Ever had a pupusa from the trucks that hover around our construction sites? Tasty. The concept has been around forever. Nonetheless, the convoys roaming the county now represent a huge trend, and it’s growing. The Post just ran a piece recalling that during the 2008 inaugural there was one food truck operating in DC. One. This year, there are over 100. Thirty of them will be there to feed the inaugural masses today. For our recent holiday party, in fact, we hired a couple of trucks to camp out in the alley behind Spider Kelly’s for our staff to enjoy, including Big Cheese (I recommend the “Thrilled Cheese”) and District Taco (the carnitas is a favorite).

But for the consumer, the question remains: How many trucks can the market reasonably sustain? Business Darwinism will cull the herd in 2013 for two reasons. First, just because it’s on a truck with a cool paint job doesn’t mean it’s great food. Sometimes it is, sometimes it ain’t. There are only so many spots they can park in, and the service window is short. The ones that don’t truly offer something special will fade out.

Second, sometimes people want to sit down at a table inside to eat, even at lunch. Even if they don’t, most eaters assume that by sacrificing the comfort of a chair and a plate, they’ll receive a commensurate decrease in price. However, price points on these trucks can rival or exceed the restaurants they’re parked in front of. This again raises the bar for the food inside the truck: If it’s not better, cheaper and more convenient, customers will seek a spot that is. Is it worth it to squat on a curb for your meal if what’s inside that foil wrapper is just mediocre?

You, the dining public, will decide their fate with your wallets. Will there be 100 trucks prowling at noon this time next year? I wouldn’t bet on it.

In 2013, will you be visiting food trucks as often, more often or less often than you did in 2012? Let us know in the comment section.

I look forward to hearing from all of you, and if you ever want to come by to share your thoughts with me in person, pull up a barstool at Spider Kelly’s or Eventide and let me have it. But please, buy a drink first.

Nick Freshman is a native Arlingtonian who grew up on the North side and now lives on the South side. After earning an English degree in college, he saw his only viable career option to be behind a bar. Time spent learning the business in the dining rooms and kitchens of restaurants in town — and one awful year in a cubicle — led him to venture out on his own. The first leap was a Five Guys franchise which is still his favorite burger. With his partners, he is an owner of Spider Kelly’s and Eventide Restaurant in Clarendon. On days off you can find him eating and drinking in Arlington with his three toughest critics — his wife Meredith, another local, his daughter Evelyn, a rising star at Oakridge Elementary, and their cat, Butter.

The views and opinions expressed in this article are those of the author and do not necessarily reflect the views of ARLnow.com. This article is not sponsored nor the result of any business arrangement.