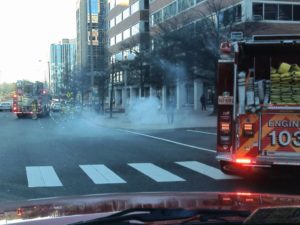 (Updated at 4:50 p.m.) The Ballston Metro station has reopened after temporarily closing due to smoke. However, Metro now confirms there was no fire inside the station.

A tipster sent a photo showing smoke flowing from the grate over Metro at Fairfax Drive and N. Utah Street.

According to Metro’s Twitter activity, debris inside a vent shaft began smoldering but there was no fire inside the station. The Arlington County Fire Department confirmed the smoke came from leaves that had ignited in a ventilation grate. Capt. Gregg Karl said that sometimes occurs if a passerby tosses a cigarette through the grates and debris below ignites.

The trouble started just before 4:00 p.m., and for about 15 minutes trains skipped the Ballston station while the smoldering debris was extinguished. Metro spokesman Dan Stessel said the brief incident affected two trains in each direction. Fans were brought in to clear the smoke and trains are again running on a normal schedule.