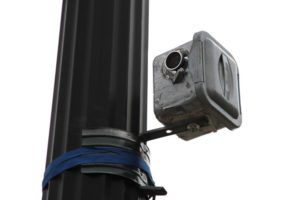 (Updated at 12:00 p.m.) Red light running decreased in Arlington at intersections with cameras, according to a new study from the Insurance Institute for Highway Safety (IIHS).

The study focused on the cameras installed in 2010 at four heavily traveled Arlington intersections — southbound Fort Myer Drive at westbound Lee Highway, northbound N. Lynn Street at eastbound Lee Highway, northbound N. Glebe Road at Fairfax Drive and westbound Washington Blvd at Lee Highway. The public was informed of the camera installation and violators were given warnings for 30 days. After the grace period, violators caught on camera received a $50 citation.

“This study provides fresh evidence that automated enforcement can get drivers to modify their behavior,” says Anne McCartt, senior vice president for research at IIHS and the study’s lead author. “What these numbers show is that those violations most likely to lead to a crash are reduced the most. The longer the light has been red when a violator enters an intersection, the more likely the driver is to encounter a vehicle traveling in another direction or a pedestrian.”

Traffic was also taped at four other intersections — westbound Lee Highway at Kirkwood Road, northbound N. Glebe Road at Washington Blvd, westbound Arlington Blvd at Manchester Street and eastbound Columbia Pike at S. George Mason Drive — to see if there was any spillover effect from the cameras. While there were some decreases in violations observed in areas close to cameras, they were not always deemed statistically significant.