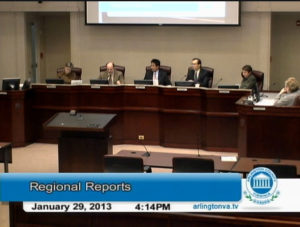 The proposal would do away with the 17.5 cents per gallon gas tax, but would increase the state’s sales tax from five percent to 5.8 percent. The plan also would increase vehicle registration fees and add a yearly $100 charge for drivers with alternative fuel cars. McDonnell said that would raise about $3.1 billion over five years to fund road, transit and rail projects across the state.

County Board member Jay Fisette said that while it’s good to have some sort of proposal on the table in order to start a conversation about transportation funding, this plan is not the answer. He further stated that the plan was offered to the General Assembly at the last minute, without adequate time to review and understand it.

“Many people see this as a vehicle on which to find a better compromise or a more functional proposal,” he said. “This is hugely important to Arlington, to Northern Virginia and to the future of this state. I’m willing to give kudos for starting a conversation, but if this passed it would be a big mistake in the form it was proposed by the governor.”

Fisette believes eliminating the gas tax would incentivize driving and reduce the use of public transit.

“While it sounds good to eliminate a tax, they would be adding others. This is a user fee. There is a gas tax in every state in the United States. We would be the first to decouple the incentive to drive with the cost of driving,” said Fisette. “You’re still looking at a fee to ride transit, but you’re going to remove the gas fee for driving and spread that cost among everyone who buys something in Virginia. That doesn’t seem fair to people who choose to use transit.”

Several Board members worried that the proposal wouldn’t actually raise the additional money McDonnell says it will, but simply moves it over from a different area. 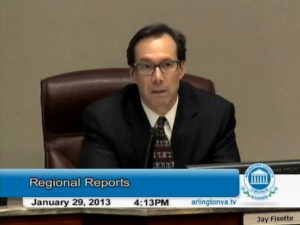 “We can talk about how poorly they’ve spent the money they have, but the reality of what the governor has proposed is it’s mostly smoke and mirrors,” she said. “It’s taking away with one hand and putting it in another place. The actual new money that’s involved in any near term frame is very small.”

Both Fisette and Hynes pointed out that nearly one-third of the proposed funds ($1 billion) would not be immediately available because it’s tied to pending legislation in Congress regarding internet sales tax revenue.

The transportation plan’s perceived dilution of local government’s authority and an increased role for state government proved to be another recurring topic of discussion. Board member Chris Zimmerman called it a “blatant power grab.”

“This is getting very frustrating to a lot of people in local government, that the administration has been not only not helpful in providing more funding, but essentially is continually distracting the conversation with these efforts to shift power away from people who have to pay the bills,” said Zimmerman.

A legislative committee approved the governor’s proposal today, and it’s expected to go before the full House and Senate in the Virginia General Assembly next week. The General Assembly is currently about halfway through its short 45 day session.