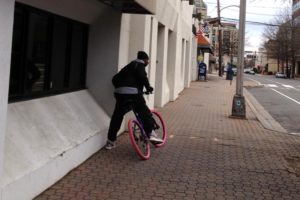 In publishing last week’s Arlington County crime report, we wrote that a man’s effort to recover his stolen bike “backfired” when he was punched in the face and his new bike was stolen.

The victim of that alleged crime wrote us shortly thereafter and said it was actually he who had the last laugh.

The man, who didn’t want his name published but who was able to confirm non-public details about the incident, says he successfully recovered his pricey Gary Fisher mountain bike while the thief only managed to punch him once and take off with his girlfriend’s used $100 bike with pink tires.

Here’s the victim’s side of the story:

My Gary Fisher 29er mountain bike with multiple very distinguishable and colorful upgrades was stolen Sunday [Jan. 13] in downtown DC in front of a Safeway at 3 pm in broad daylight by a guy who broke my lock.

The next Thursday I was biking to Caps practice at Kettler in Ballston on my girlfriend’s pink tired bike (which the perp is pictured with here) when I saw a bus pull up with my stolen Gary Fisher on front. I put the pink tire bike I was riding on the rack with my stolen Gary Fisher and boarded the bus. I rode for a few blocks and got ready to make my move at the Whole Foods. I went to get both bikes and the guy charged off the bus and we wrestled for the Gary Fisher. Eventually I got my lock around the frame and wheel so he couldn’t ride away as he got one good punch in. With the Gary Fisher secure, I knocked him down and he put his hand in his bag and threatened to have a gun. He probably didn’t but l was spooked and let him up and backed off.

He got up and got on the pink tired bike and rode off. I got my nice Gary Fisher back. He rode off on this pink tired bike that I bought for 100 bucks a few years ago heading toward Courthouse and Rosslyn. I assume he dumped it right after he rode out if sight because he stood out on that thing and cops never found him.

I was fine after the fight and didn’t have a mark on me.

If you see the pink tired Specialized Hardrock around Clarendon he stole it. Also by the time I got to Kettler on my Gary Fisher, practice was over. At least I got my bike back.

I’m sure the police don’t encourage confronting thieves like this and maybe that’s why they took the successful part of the report out. But the bike I got back is really valuable to me.

Police say they have not made any arrests in the case so far.