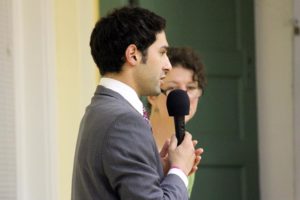 Samaha, an Arlington resident, has become an outspoken advocate for gun control since his youngest sister, Reema, was killed in the 2007 Virginia Tech mass shooting. He currently serves as a spokesman for the group Fix Gun Checks.

In January, Moran re-introduced a bill, the ‘NRA Members’ Gun Safety Act, which would require background checks for every gun purchase, among other measures that advocates say are supported by most National Rifle Association members. In a statement, Moran lauded Samaha’s gun violence prevention advocacy.

“Omar and his family suffered a tragic loss at the hands of a mentally ill individual with access to firearms,” Moran said. “I am impressed with his dedication to making our country safer and pleased Omar will be joining me at the State of the Union.”

“Since Omar lost his sister in 2007, our nation has experienced over 20 mass shootings with five or more fatalities,” Moran continued. “Following the Newtown shooting, President Obama took decisive action and demonstrated determined leadership by putting forward a comprehensive plan to reduce gun violence. Now, Congress must act on this proposal.”

President Obama’s State of the Union address will start tonight (Tuesday) at 9:00 p.m. More about Samaha’s background, after the jump.

Born in Fairfax, Virginia, Omar is a 2006 graduate of Virginia Tech. Omar’s youngest sister Reema also attended college there and was killed in the mass shooting on the VT campus. In late 2007, Omar co-founded Students for Gun-Free Schools, which opposes efforts to force colleges and universities to allow students and faculty to carry concealed handguns on their campuses. Omar also helped expose the “Gun Show Loophole” on ABC’s 20/20 by filming undercover at a Virginia gun show in April 2009. Following a national tour with Mayors Against Illegal Guns in 2011, Omar served as a Legislative Assistant and Grassroots Coordinator with the Coalition to Stop Gun Violence and continues to work with them today as a volunteer advocate.

In 2011, Omar traveled to 56 cities around the country with Mayors Against Illegal Guns representing the “Fix Gun Checks Tour,” which highlighted the 32 Americans who are murdered each day with guns. After meeting with survivors of gun violence, mayors, law enforcement officials, faith leaders and gun owners, the tour ended on Capitol Hill, where Omar and 60 other gun violence survivors called on Congress to fix our national background check system for gun purchases, and apply those checks to all gun sales.