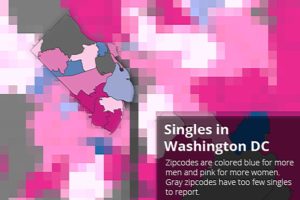 (Updated at 10:10 a.m.) Arlington’s Rosslyn neighborhood is the best place to look for single men in the D.C. area, according to the real estate website Trulia.

For a blog post called Looking for Love in All the Right Places, Trulia looked at single adults below the age of 65 in some major metropolitan areas, including D.C. The company found that “downtown” employment centers — like Rosslyn — typically have more single men than women, while “uptown” residential areas have a higher ratio of women to men.

Rosslyn was recognized as the highest men-to-women ratio in a ZIP code (22209) with at least 1,000 population and 20 percent population alone. Similarly, Upper Connecticut Avenue in D.C. took the honor of the highest women-to-men ratio.

While Rosslyn took the regional title, the Crystal City/Pentagon City area also looked like fertile ground, with more single men than women. Parts of southwestern Arlington — including Shirlington and Fairlington — had the county’s highest ratio of single women to men. The Clarendon, Courthouse and Ballston area collectively had a slightly higher ration of women to men.