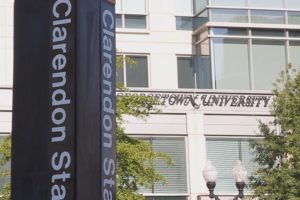 (Updated at 4:20 p.m.) Georgetown University is reportedly considering opening a satellite residential campus in Clarendon to house up to 385 students.

The Hoya student newspaper reports that the school is looking at Clarendon, Capitol Hill and a location north of the Georgetown’s main campus as possible areas to house 385 students starting in the fall of 2015.

The off-site housing is necessary in order for the university to comply with an agreement with Georgetown residents and the D.C. government to house 90 percent of students on campus by 2025. Construction of a planned on-campus dormitory has been delayed, The Hoya reports, making a satellite campus — likely apartments rented by the university — a last-resort option for compliance.

The school may have a hard time convincing students to live far outside campus, however.

“University officials have discussed making satellite housing higher quality than current campus housing by including a swimming pool for student use or situating the campus near a Metro stop,” The Hoya wrote. Georgetown would also run a shuttle from the satellite campus to the main campus across the Key Bridge.

Stacy Kerr, Assistant Vice President of Communication for Georgetown, disputed The Hoya article and said it overstates the number of students who would be potentially be housed in Clarendon. She said the university is actually looking to house some 160 students.

Georgetown has a history with Clarendon, operating its Center for Continuing and Professional Education on Wilson Blvd across from the Clarendon Metro station. The program, however, has moved to a new office in D.C.’s Chinatown neighborhood. The school’s lease on the building runs until 2014.