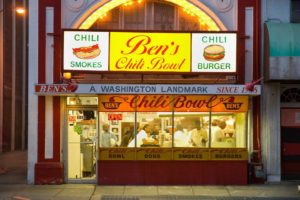 Ben’s Chili Bowl is hoping to become part of the Arlington community when it comes to Rosslyn early next year, co-owner Nizam Ali said.

Occupying Ray’s Hell Burger’s old space at 1725 Wilson Blvd is a chance to replace a valued piece of the community, Ali told ARLnow.com.

“Ray’s was there, and everyone really valued Ray’s,” he said. “It was a great place, I’m sorry to see it go. It was an opening, and it left kind of a void that people flock to that was local and very special. It seemed like a special attempt to go there.”

The Ali family, which has owned Ben’s at it’s original U Street NW location in D.C. since it opened in 1958, have only begun expanding in the last few years, with new spots in Nationals Park, FedEx Field and the restaurant Ben’s Next Door. The Rosslyn restaurant will be its first “brick and mortar” expansion, Ali said.

“I think in our expansion, there’s so much love for the original Ben’s for many reasons, we hope that that love will continue as we expand,” Ali said. Ben’s is also working to open another spot on H Street NE, but no other concrete expansion plans are in the mix. “These stores are part of testing the waters a little bit.”

The space will be about 1,700 square feet, smaller than the original Ben’s, but Ali said he wants people to walk in and feel like they’re in the same place. However, Rosslyn Chili Bowl customers can hold one thing over the patrons of the original: they can pay with credit cards, Ali said.

Ben’s had previously looked into moving to Clarendon, hearing that it was an ideal spot for its late-night crowd, but couldn’t make a location work. Ben’s in Rosslyn will be open well into the night anyway, Ali said. The U Street store is open until 4:00 a.m. on Fridays and Saturdays and until 2:00 a.m. Monday-Thursday.

“Our goal is to be available for folks late at night as it’s needed,” he said. “I think it would be good to stay open late as long as we’re not bothering anybody… We’re a family that’s invested in communities, we want to have a community feel. We know we’re entering into a community already, we’re kind of the outsiders coming in, it’s about being respectful.”

The Ali family signed the lease in late August. Nizam Ali said he’d like to be able to open at the beginning of the new year, and hopes to partner with Arlington County to make that a reality. However, he said early 2014 is a safer prediction for when the restaurant will open.