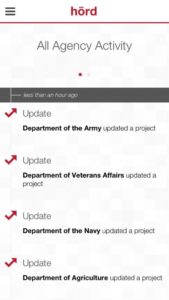 Operating out of a basement in Arlington Ridge, the three-man team that makes up GovTribe has worked under far harsher conditions.

CEO Nate Nash, CFO/COO Marc Vogtman and Chief Technology Officer Jay Hariani, while working for Deloitte, traveled to, among other places, Saudi Arabia and Iraq as technology consultants. Compared to working on a laptop in the middle of the desert, working on an iPhone app in a basement doesn’t sound too bad.

Together, Nash, Vogtman and Hariani make up GovTribe, which is the company behind hōrd, an app that updates federal government contracting information in real time, simplifying a process that can take days or weeks down to a few finger swipes.

“We felt like the tools available for this were less than stellar,” Hariani said. “We thought it could be improved upon.” 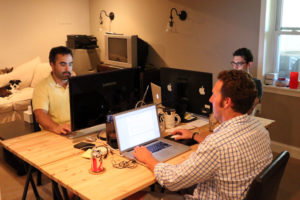 The app easily shows when a federal agency posts a new contract, amends a contract and awards a project. It shows the details of each project, including the point of contact, shows the agency’s history of awarding contracts and shows firms’ contract history. All of the data is publicly available, but the government’s websites for the information can be difficult to navigate, and not all of the information is in the same place.

“This goal of making our former lives easier has thrown ourselves into the business of building off of open government data,” Nash said. “We’re trying to use that data to give insights into how it works for the customer at a personal level.”

Nash, Vogtman and Hariani left Deloitte and started GovTribe in September 2012. This January, they launched the beta version of hōrd, sending it to friends and other testers before formally launching the official app Aug. 9. 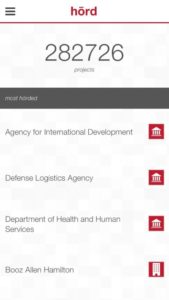 Nash declined to say how many downloads hōrd has seen so far, but said it exceeded its monthly goal by 50 percent. It’s free to download on the app store and free to use for a month, after which it’s a $5 monthly subscription.

The reviews have been largely positive so far — hōrd has eight ratings in the App Store and is averaging five stars — and GovTribe will next develop an interface for iPad and one usable in a browser.

“It’s blowing their minds,” Hariani said when asked to gauge user reactions. Nash added, “A lot of people have said ‘I can’t believe this didn’t exist before.'”

GovTribe doesn’t have any venture capital funding — “We are completely bootstrapped,” Nash said — and none of Nash, Vogtman and Hariani had any experience building an iPhone app. When they decided that was the best platform for what they wanted to build, they simply taught themselves how to create it.

“We taught ourselves everything we think we need to know,” Nash said, “but by no means do we think we’re done learning.” 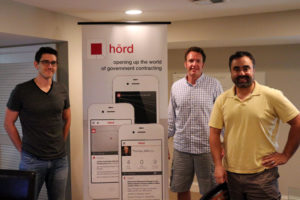 GovTribe didn’t launch initially to build what would become hōrd; in fact, they were focused on building a tool to make bidding for a process easier. The more they got into the data, however, the more they realized what they needed to build.

“It was about finding a problem to solve,” Vogtman said. “We’d be at these proposal meetings and people would ask questions, and nobody really knew any of the answers. We realized that was the best place to start.”

Like many industries in Washington, contracting can frequently be determined by who you know. Hariani and Nash said they wanted to “democratize the process,” and making it easier for new or aspiring contractors to break through. Frequently, small contractors aren’t even aware of whom they’re competing against for projects, which makes preparation more complicated, Vogtman said.

Hōrd’s name is a mixture of horde and hoard — horde because the multitude of agencies and contracts evoked for Nash a large, disorganized group, and hoard because Nash and his wife binge-watched “Hoarders,” and he realized putting specific agencies into your personalized feed was a lot like hoarding them.

The south Arlington basement isn’t filled to the wall with decades-old newspaper clippings, just three work stations and a couple of friendly dogs. The bootstrapped company would like to start gathering one thing, however: in a couple of weeks, they will be seeking their first round of outside investment.