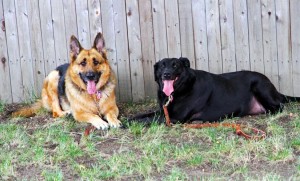 The Arlington County Board is considering making tethering a dog for more than three hours illegal.

At its Sept. 21 meeting, the board will vote on whether to hold a public hearing on the issue on Oct. 19. Under the ordinance change, dogs would not be allowed to be tethered in a yard for more than three hours in a 24-hour period, or attached to a running cable or trolley system for more than 12 out of 24 hours.

County staff, in its recommendation, said that tethering dogs for an extended period of time “can put the animal’s health at risk if the animal cannot appropriately access food, water or shelter. Tethered animals can also develop aggressive behaviors as a result, which may endanger others.”

The Animal Welfare League of Arlington and its animal control officers support the proposal, according to the staff report. The ordinance would state that, if a dog is observed tethered once and then again three or more hours later, the presumption will be it has been tethered continuously for that period of time.

The proposal does state that the tethering is allowed if the owner is physically within reach of the dog or the dog isn’t tied to a “chain, rope or line of any kind that is too short to enable the dog easily to stand, sit, lie down, turn about, and make all other normal body movements in a comfortable, normal position for the animal, and reach shade as necessary.”