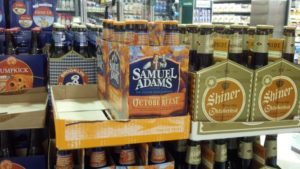 (Updated at 3:20 p.m.) Fall beers, particularly pumpkin ales, are selling faster than ever despite many craft beer fans’ complaints that they were released too early.

Nick Anderson, the beermonger at Arrowine, who writes ARLnow.com’s Your Beermonger column, said that the first shipments of many popular fall beers have already sold out.

“If it didn’t sell, no one would be making it because I wouldn’t be buying it,” Anderson wrote in an email.

“We have turned over larger orders of beers such as Southern Tier Pumking and Schlafly Pumpkin Ale a couple of times, and have swiftly sold through other seasonal brews such as Dogfish Head Punkin Ale, Shipyard Pumpkin Ale, Smuttynose Pumpkin Ale, and more,” she wrote in an email. “We just received Heavy Seas Greater Pumpkin (a bourbon-barrel aged pumpkin ale), and that’s not going to last.”

While some craft beer drinkers lament how early the fall beers have arrived, others — including those brewing said beer — say it’s never too early for what is the most popular of the seasonal brews. Anderson explained the origin of “seasonal creep” in his column last week:

As annoying as seasonal creep is, the bottom line truth is that it pays to be first: people tend to buy the first seasonal offering they come across, and then stick with it. Another reason is that the growing demand for Pumpkin Ales is forcing larger brewing commitments, with producers starting earlier to make more in an effort to sate market demand.

In years past, many pumpkin beers would be off the shelves before the leaves changed, especially frustrating drinkers who prefer to wait until the appropriate time to drink the seasonal beers. Simms says consumer habits have driven the season creep.

“I have heard on more than one occasion, even from our staff, that people are buying the pumpkin and seasonal beers because they are limited or sometimes hard to find,” she said. “But, even for the more widely-available brews, the demand is still there and the message has been pretty much the same: ‘It’s August (or September), and I’m not going to drink this now, but I need to have it for October.'”

This year, Anderson said, breweries are making enough so storing in advance won’t be necessary.

“The good news is with the ramped up production, there will be runs that arrive when people are actually looking for them: Schlafly should be back by the end of next week, with one more run at the beginning of October; Southern Tier is sending a last run of Pumking for Oct. 1,” Anderson said. “Ten percent of Schlafly’s total output for this year will be Pumpkin Ale. That’s insane, but it’s what breweries are going to have to do to meet demand AND have enough to put out in late September/early October.”