It only hit me the other day that for all of the ‘Beer 101’ we’ve done over the past couple of years, I hadn’t written a full-on Pumpkin Ale column yet. Last year I did a recap of a Pumpkin Beer tasting held at my home with friends, but that was it. With all of the talk about the early release of Pumpkin Ales this year, it’s worth taking a few moments to look at the surprisingly long history of Pumpkin Beer, dispel some of the myths about it, and revisit how ‘seasonal creep’ happens with beer — a topic I initially got into with this column last year.

Not unlike Cider, the history of Pumpkin Beer in early America is one of making due: malt was hard to come by in the New World, and pumpkin meat was a plentiful native source of fermentable sugar. Pumpkin Beers remained popular through the 18th Century, but were supplanted by the proliferation of Lagers made with newly plentiful wheat and barley crops — pumpkin became thought of as unfashionably antiquated and old-timey. Save for a brief everything-old-is-new-again return to prominence in the mid-19th Century, Pumpkin Beer was largely forgotten. 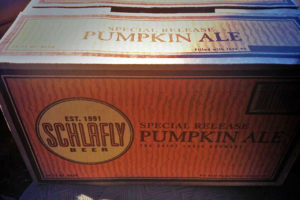 Fast-forward to the early 1980s, when the American craft beer revolution was beginning to spread: A new era of exploration and experimentation with recipes both new and very old led to the rebirth of Pumpkin Ale. The modern Pumpkin Ales tend to place an emphasis on spice notes usually seen in pumpkin pie — cinnamon, nutmeg, clove, allspice, etc. — than simply on the gourd itself. Today arguments resume every year over which Pumpkin Ale is the best, which are too spicy, and which aren’t spicy enough. Here are a couple things to keep in mind as Pumpkin Ales continue to take over beer shelves during the next few weeks:

Pumpkin has its limits: Spices can easily be overdone, but pumpkin itself only imparts so much flavor into a beer, even when used in large quantities. There are some Pumpkin Ales that feature the gourd more than others — Post Road by Brooklyn Brewery comes to mind — but even some of the beers that do use enough spice that much of the pumpkin character is lost.

Size matters: Enjoy a spicy Pumpkin Ale, but don’t want anything too sweet and ‘dessert-y’ feeling? Take a quick peek at the ABV on the label, if it’s provided. As with any other alcoholic beverage, a higher ABV gives the perception of a richer feeling on the palate. Getting into the 8-9% range with Pumpkin Ales can make them feel sweet — cloying, even — and can prove to be a step too far for some.

That’s probably not fresh pumpkin, and you shouldn’t really care about that: I know that sounds like some sort of blasphemy coming from me, and considering the emphasis placed on freshness in craft beer. But where are pumpkins being harvested in spring for brewing a beer in late spring/early summer to hit shelves in mid/late summer? There are a couple breweries who hold out for fresh pumpkin (Sixpoint Autumnation is one, and Rogue is making an Ale with pumpkins from their own patch), but for the most part it’s coming out of cans. Before judging, think about it this way: with pumpkin not heavily influencing flavor as we established above, it’s not as if you’re losing the intense, vibrant flavor that you would if you used old hops as opposed to fresh. Also, you’re going to tell me all the pumpkin you used to make that pie filling last year was made from fresh pumpkin? In this case, I say there’s nothing wrong about using any kind of pumpkin.

So, why did Pumpkin Ales show up so early this year, with some arriving more than a month earlier than usual? As annoying as seasonal creep is, the bottom line truth is that it pays to be first: people tend to buy the first seasonal offering they come across, and then stick with it. Another reason is that the growing demand for Pumpkin Ales is forcing larger brewing commitments, with producers starting earlier to make more in an effort to sate market demand. Check out this great breakdown of the situation from Schlafly, whose Pumpkin Ale is among the most popular in this area.

I know you all have some favorite Pumpkin Ales — what have you been getting into so far this year? I’ve been really enjoying the new Devils Backbone Ichabod Crandall; it’s been giving Schlafly a run for its money in my home. Share your recommendations, sightings, and comments below. Until next time.